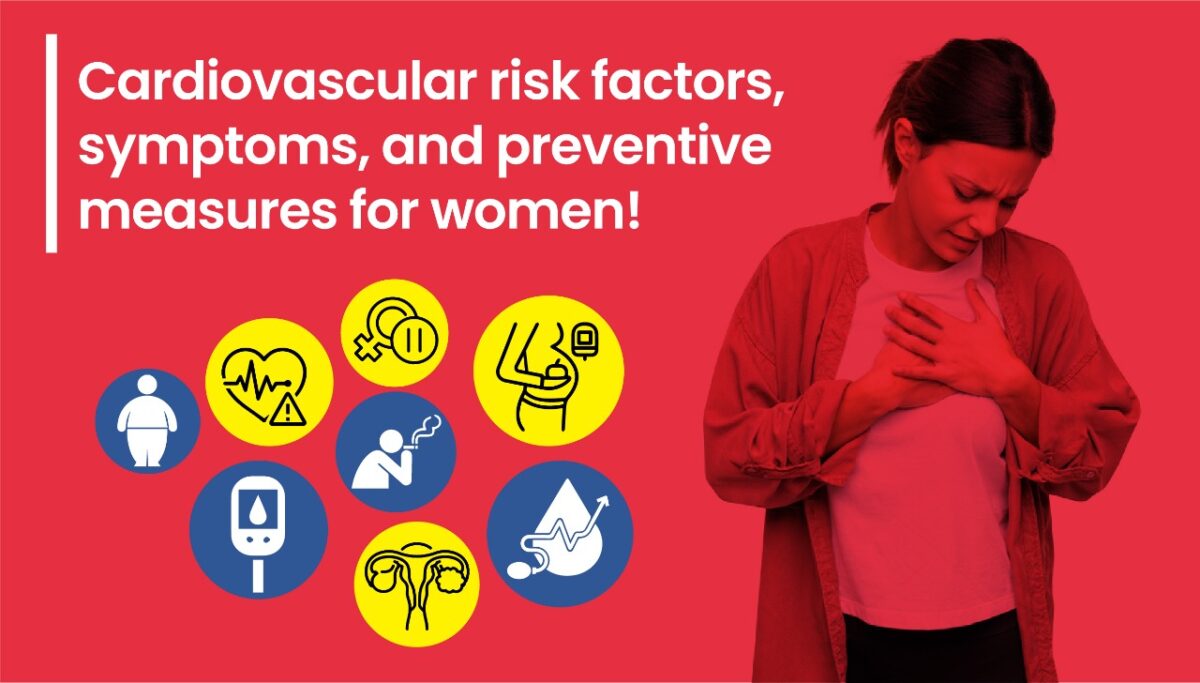 Women especially at young age are experiencing an unprecedented increase in heart attacks and strokes. We attempt In this article to make the reader aware of the reasons for this.

How are women different from men for developing heart attack?

Women tend to develop cardiac disease 7-10 years later compared to men that is attributed to the protective effect of estrogen hormone, which is present till menopause.

What are the traditional risk factors for developing heart disease?

Both men and women are prone to develop cardiac problems if they have one or multiple risk factors listed below. They are called traditional because they have been in practice for the past 6 decades.

Despite the absence of many of these risk factors, women worldwide are increasingly dying due to cardiac ailments.

Women are sensitive than men for the development of heart diseases when they have associated traditional risk factors.

Unique risk factors for cardiac problems in female gender include:

About 10% of women experience menopause naturally before the age of 45 years. This is called early menopause. Because of lack of estrogen in post menopausal women, it predisposes to cardiac events.

Compared to women of similar age, those who attain natural or surgical menopause (removal of uterus – Hysterectomy) less than 45 years are at 50% higher risk of developing heart attack and 20% increased risk of death.  Those women who attained surgical menopause tend to have higher cardiac events compared to natural menopause. So women should be dissuaded to undergo uterus removal surgery unless there is a clear evidence that the procedure is definitely required. Hormone replacement therapy has been tried to mitigate this risk but in vain. Current guidelines are against hormone replacement therapy for early menopause.

What can we do to prevent these cardiac events in women?

But for women further measures are needed to address the unique risk factors for women. The American College of Cardiology in its 2019 guidelines notified pre eclampsia, early menopause and autoimmune disease as “risk enhancers” for cardiac disease. They also added that physicians should have a low threshold to treat those patients with risk enhancers by life style measures and cholesterol lowering drugs to reduce the risk of developing heart attacks.

Finally women should realize that they are no longer at low risk for developing cardiac ailments and need to understand there are new risk factors that put them at “enhanced risk” for developing heart attacks.

Your heart needs to work 24/7 to keep your body systems working. Like any other body tissue, the heart too needs oxygen and nutrients to function efficiently. For this, we have a network of arteries that supply blood to the heart muscles which are called the coronary arteries. There are two chief coronary arteries:

the left and right coronary arteries, that branch out from the aorta near the point where the aorta and the left ventricle meet.

The right coronary artery supplies blood to the right atrium, the right ventricle, a small bottom area of the left ventricle and the back portion of the septum.

The left coronary artery supplies blood to the left atrium and ventricles and the front portion of the septum.

These coronary arteries give out various branches that supply blood to different parts of the heart.

There are an array of heart diseases but they do share some common symptoms. If you experience any of these symptoms, it is perhaps a good idea to get yourself tested. Check these out here:

For continuous circulation, the left and the right side of the heart must work together. Here are the series of steps that causes the blood to flow in the heart, lungs and body.