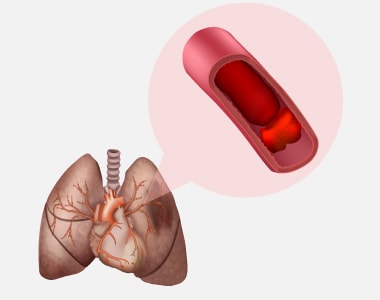 Pulmonary embolism is a blockage in one of the pulmonary arteries of the lungs. The most common reason for pulmonary embolism (PE) is a blood clot (thrombus) that travels to the lungs from other parts of the body (usually a leg) and becomes lodged blocking the blood vessel in the lung.

It is a medical emergency and immediate treatment can greatly increase the survival chances.

When a blood clot or in some cases, a clump of material causes a blockage in an artery of the lung, it leads to pulmonary embolism.

Clump of material other than blood clots include:

In majority of the cases, multiple clots are involved but it is not necessary that all are involved in embolism. The affected part of the lung may die due to disruption of the blood supply. Moreover, it becomes difficult for the affected lung to supply oxygen to the rest of the body.

Its symptoms vary greatly depending on the size of the clots, the part of the lung affected, or pre-existing heart or lung disease.

Common signs and symptoms include:

Other signs and symptoms due to an underlying health condition or disease include:

The risk factors are mostly similar to that of a patient with deep vein thrombosis (DVT) which include:

When a patient is suspected of pulmonary embolism or blood clots in the lung, then several crucial tests may be performed which include:

It the simplest noninvasive way to measure the blood oxygen levels. A blood oxygen saturation level of 95 percent is abnormal.

It is performed on a blood sample taken from an artery and the level of blood gases is evaluated. A partial pressure of oxygen less than 80mm Hg is abnormal.

It is done to rule out other diseases such as pneumonia or fluid in the lungs which may be responsible for the symptoms.

It determines whether the person has experienced pulmonary embolism (PE) by evaluating both air flow and blood flow in the lungs. It also decides the probability of the PE which can be high, intermediate or low. A normal VQ scan suggests absence of PE.

Spiral computed tomography of the chest

It serves as an alternative to VQ scan. When PE is suspected, a contrast dye is injected through a vein to make the blood vessels stand out.

When symptoms of PE tend to be non-conclusive even after a low or intermediate VQ scan or a normal spiral CT scan, then pulmonary angiogram is a definite test. It an invasive test that uses x-rays to reveal the blockage in the veins or arteries.

It can accomplished by preventing the underlying conditions which cause PE, such as deep vein thrombosis and also by following the preventive measures which include:

Approximately 10% of the patients who develop pulmonary embolism die within the first hour without immediate treatment.

Immediate treatment greatly reduces the chances of death and shortens the stay in the hospital. The following treatment options are considered:

These stocking are up to the knee and maintain a pressure on the legs to prevent blood clots. Sometimes they are also referred to as “support hose”.

Rarely a surgical intervention is used to remove a clot or to prevent it from reaching the lung. This procedure may include:.

Low molecular weight warfarin are available in self-injectable forms which include dalteparin, enoxaparin and tinzaparin, but it carries the risk of bleeding which has to be taken care of, while using such medications.