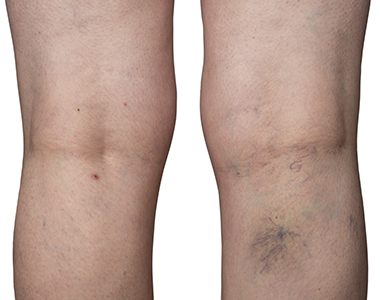 When a blood clot (thrombus) is formed in one or more of the deep veins of your body (usually in the legs), it is known as deep vein thrombosis (DVT). Sometimes this clot becomes detached from the inner walls of the blood vessel and travels to another part inside the body. DVT may develop due to an underlying medical condition particularly the one which affects the clotting of the blood.

It can be caused by the factors which prevent the normal circulation of the blood and it’s clotting, such as long periods of rest (during a particular medical condition), injury to the vein, surgery and certain medications.

The risk factors are as follows:

The following are the complications which may arise due to DVT:

The person may be asymptomatic during the formation of the thrombus, however, during post thrombotic period when it has caused damage to the veins, the blood flow to the affected body part may be compromised. The following symptoms are observed:

Sometimes the development of a serious health complication such as pulmonary embolism is responsible for the symptoms in the DVT patients which are as follows:

These symptoms appear suddenly, and an immediate medical attention is required.

The diagnosis is initiated by a thorough clinical examination and involves review of the patient’s medical history. Based upon these findings, the physician will categorize the patient into low or high risk DVT. Further tests may be considered to rule out other health problems and to confirm the diagnosis, which are as follows:

A recent World Thrombosis Day Ipsos survey showed that there is less awareness of DVT in countries around the world. Thus, the first step in prevention is making the public aware of DVT. The preventive measures are different depending on the person’s condition who are at risk of developing DVT:

In pregnant women, certain medication may be prescribed if she has risk factors such as likelihood of having a cesarean birth, bed rest, history of DVT, and inherited thrombophilia.

During travel or in longer hours of sitting posture:

Treatment for DVT includes certain medicines and therapies, which are as follows:

It may be recommended to prevent swelling and to avoid post-thrombotic symptoms in the patients.

Surgical treatment may be performed when medications fail to dissolve the clots.