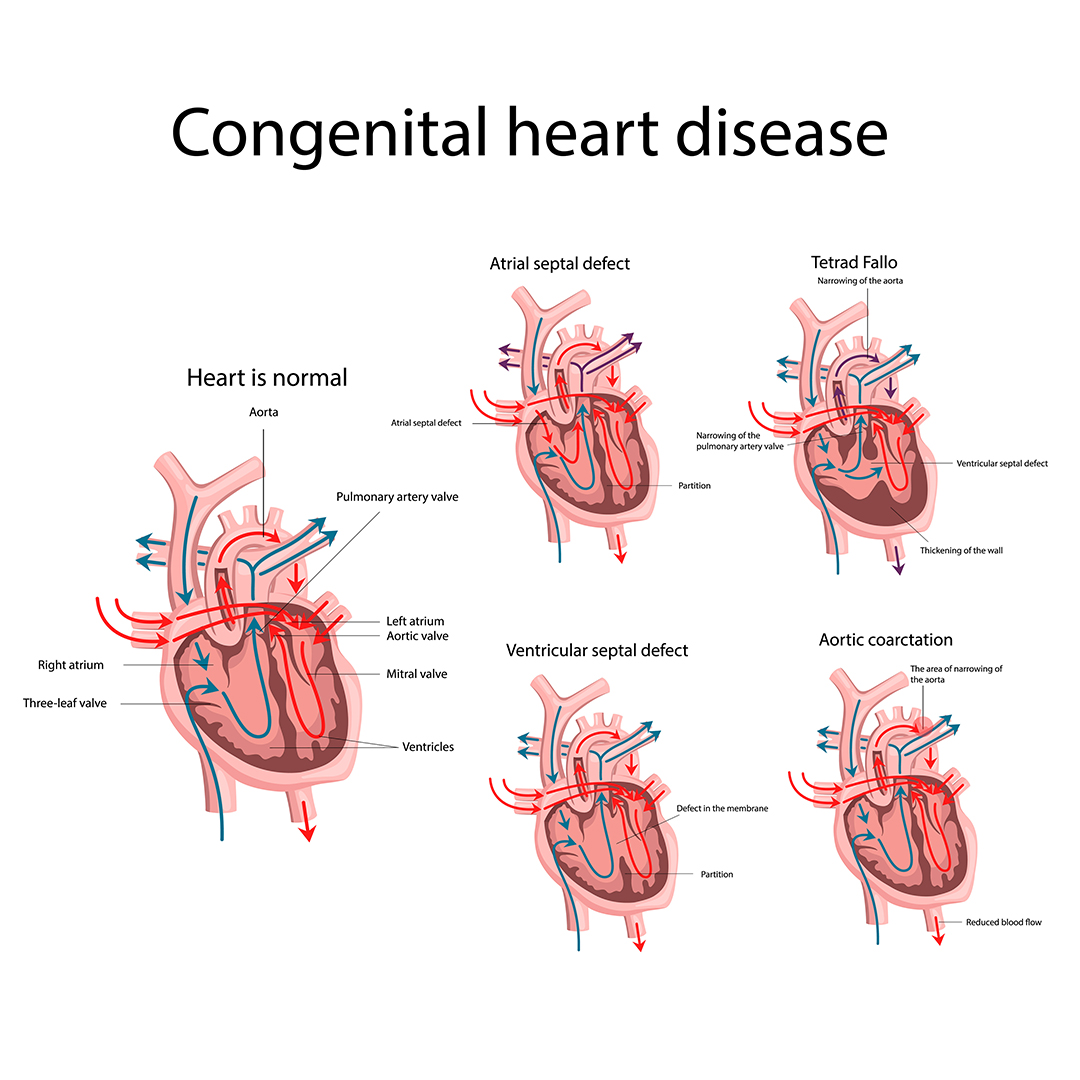 Congenital heart diseases are diseases that are present from birth and affect the normal heart functioning. These are the most frequently occurring congenital disorder, responsible for 28% of all congenital birth defects. The birth prevalence of CHD is reported to be 8-12/1000 live births. Considering a rate of 9/1000, about 1.35 million babies are born with CHD each year globally.

What are the causes of congenital heart defects?

In most cases, no obvious cause of congenital heart disease is identified. However, some things are known to increase the risk of the condition, including:

Many cases of congenital heart disease can be diagnosed before a baby is born during an ultrasound scan in pregnancy. At times a focused foetal heart scan called foetal echocardiography in specialized centers helps to diagnose the cardiac problem before birth. However, it’s not always possible to detect congenital heart defects in this way.

Congenital heart disease can have a number of symptoms, particularly in babies and children, including:

These problems are sometimes noticeable soon after birth, although mild defects may not cause any problems until later in life.

There are many types of congenital heart disease and they sometimes occur in combination. Some of the more common defects include:

Treatment for congenital heart disease usually depends on the defect you or your child has.

Mild defects, such as holes in the heart, often don’t need to be treated, as they may improve on their own and may not cause any further problems.

Surgery or interventional procedures are usually required if the defect is significant and causing problems. Modern surgical techniques can often restore most or all of the heart’s normal function.

However, people with congenital heart disease often need treatment throughout their life and therefore require specialist review during childhood and adulthood. This is because people with complex heart problems can develop further problems with their heart rhythm or valves over time.

Most surgery and interventional procedures aren’t considered to be a cure. The affected person’s ability to exercise may be limited and they may need to take extra steps to protect themselves from getting infections.

It’s important that a person with heart disease and their parents or carers discuss these issues with their specialist medical team. 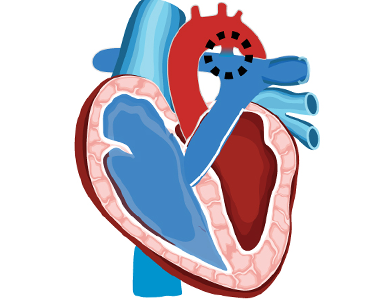 Patent ductus arteriosus (PDA) is a congenital heart condition in which there is an opening between the pulmonary artery and the aorta. The ductus arteriosus is a small connection in the fetal heart helps oxygen rich blood to by-pass the immature baby’s lungs and flow into the body. This connection naturally closes shortly after birth. The connections that fail to close, are called patent ductus arteriosus, where the oxygen-rich and oxygen-poor combines together resulting in an increase in the workload of heart and various other complications.

It is the sixth most common type of congenital heart disease, and is frequently diagnosed in infants; although it may remain unknown until childhood or even adulthood. 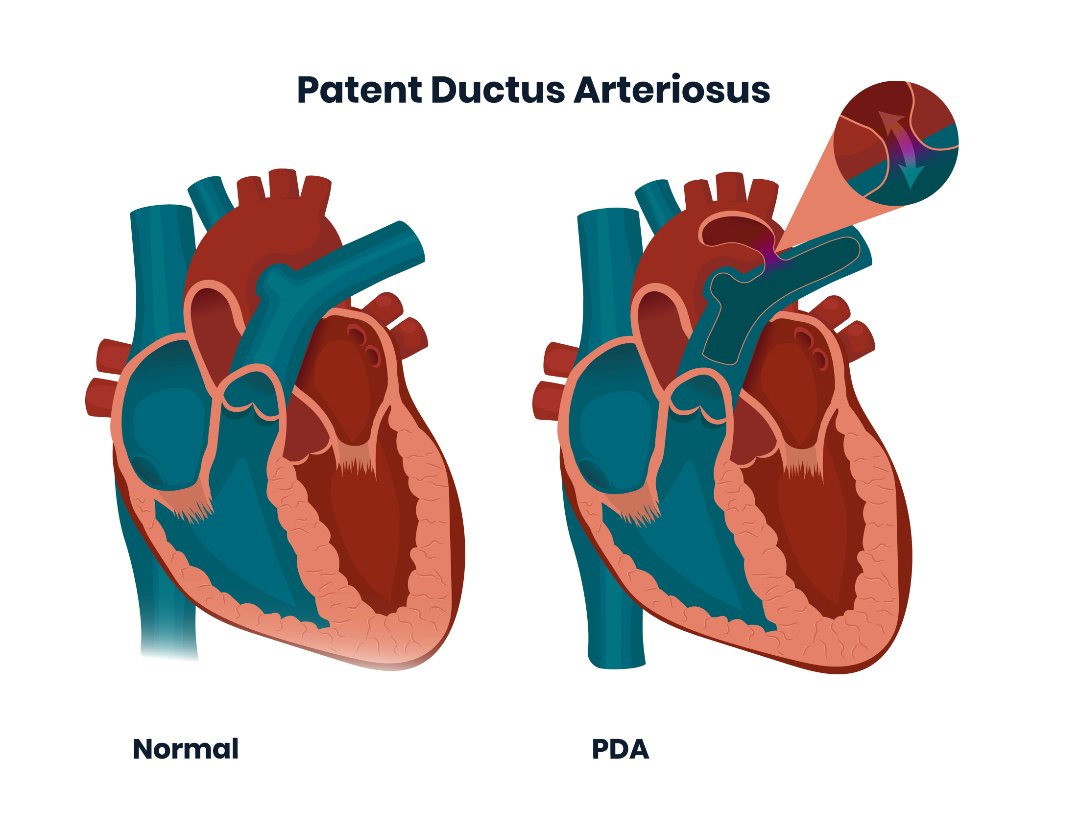 In neonates, a heart murmur on examination with a stethoscope during regular checkup may indicate PDA.

In infants, a large PDA would show the following symptoms:

The symptoms in the case of adults with undiagnosed PDA include heart failure, fast heart beating (atrial fibrillation) or with the reversal of shunting – unoxygenated blood from the right side of heart to the left side of heart.

In most of the children the cause of PDA is unknown, but genetic factors are thought to play a causative role.

Every baby is born with ductus arteriosus which eventually narrows and closes within three to four days after birth. It may take longer time for closure in the case of premature babies.

But if the duct doesn’t close, it may lead to an increase in the blood flow to the heart and lungs of the baby, which might enlarge or weaken the heart muscle.

The risk factors of having patent ductus arteriosus include:

A heart murmur heard during a regular checkup may lead to further work-up for PDA.

The following tests Are recommended for diagnosis of PDA: 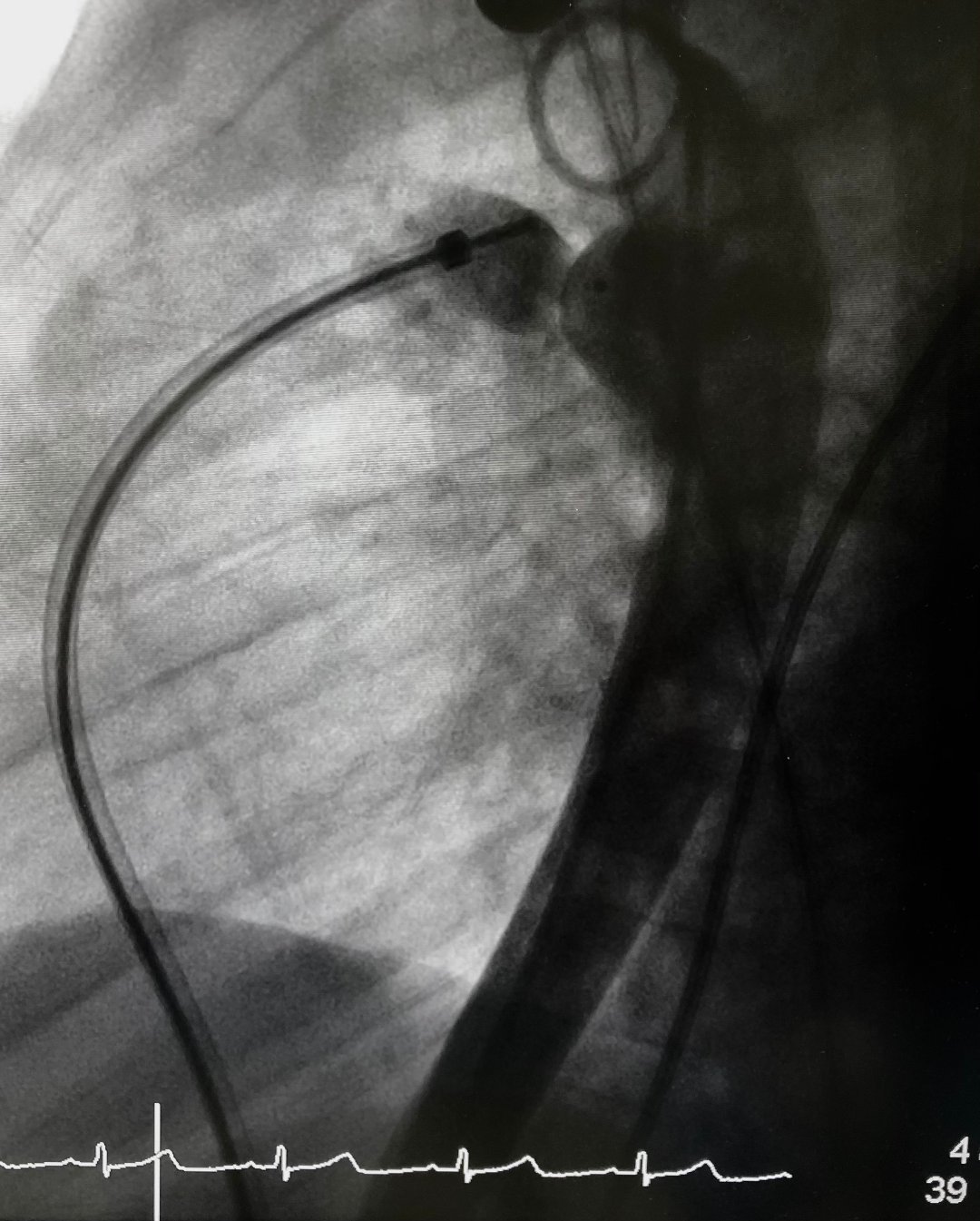 Treatment is generally not considered, as the PDA usually closes on its own in the case of a premature baby. Close monitoring is considered for full term babies, children and adults with small PDA and with no other health complications. During follow-up, if the baby does not have any other complications, it is considered to be closed. On the other hand, if the baby has certain heart problems or defects, the ductus arteriosus might be lifesaving.

In a premature baby, it may take one to two years. But in full term babies, PDA that remains open after several weeks rarely closes on its own.

Medicines such as indomethacin or ibuprofen may be considered. These medicines work well for some newborns. The earlier treatment is given the greater are the chances for it to succeed.

Medical procedures may be considered in the case where medications are not effective.

A transcatheter procedure is used to block blood flow through the vessel. This is usually using an umbrella device that closes the PDA. This procedure does not require general anesthesia and requires hospital stay less than 24 hours.

An open heart surgery might be considered if the catheter procedure is not suitable to repair PDA. This is usually reserved for very large ductus and other associated heart defects.

Patent ductus arteriosus may not be prevented, but certain measures should be observed for a healthy pregnancy. 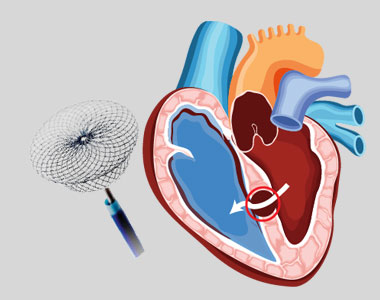 Right two chambers – right atrium and right ventricle pump the deoxygenated blood collected from various parts of the body to the lungs. Blood gets saturated with oxygen in the lungs and returns back to the left side of the heart.

Ventricular septal defects (VSD) is a common type of congenital heart defect, which is characterized by an abnormal opening or a hole in the interventricular septum, the dividing wall between right and left ventricles. The oxygen-rich blood from the left ventricle will enter into the right ventricle through the opening, thereby getting mixed with deoxygenated blood which then enters into lungs. This will force the heart and lungs to work harder.

The exact cause of VSD is unknown. During fetal heart developmental stage, the heart develops from a large tube which eventually divides into chambers and walls. Any abnormality in this process will lead to the formation of a defect in the septum. If the defect is in the interventricular septum, then it is said to be ventricular septal defect. There may be one or more VSDs.

Based on the location and development of VSD, it is classified into following types:

Small defects in the septum do not show any symptoms because it closes on its own gradually during childhood.

Large defects show signs and symptoms usually after birth within a few weeks or months.

The first sign of VSD is heart murmur, which is a whooshing sound that can be heard using a stethoscope. The other symptoms include:

Ventricular septal defects mostly occur due to defective genes and chromosomes, that may be hereditary.

Environmental factors during pregnancy may also play a role in development of VSD in the fetus.

Large or medium septal defects if left untreated, may lead to life threatening complications such as:

If heart murmurs are detected during the physical examination, the patient may be advised further testing to conform the diagnosis.

Usually treatment is not needed for small VSDs, as they close on their own gradually after birth.

The treatment for ventricular septal defects include:

Ventricular septal defects cannot be prevented, but following certain measures during pregnancy may be helpful to prevent the risk of VSD. The measures include: 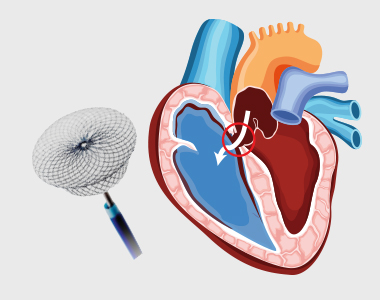 What is an Atrial Septal Defect or ASD?

Heart consists of four chambers, of which upper two chambers are called as atria and lower two chambers are called as ventricles. Atrial septal defect (ASD) is a type of congenital heart defect, in which there is an abnormal opening or a hole in interatrial septum (dividing wall between two atria). This opening allows the passage of pulmonary venous blood from left atrium to right atrium, causing mixing of oxygenated and deoxygenated blood in right atrium and increasing the flow of blood to lungs. The increased blood flow may increase the workload of the lungs, and eventually cause damage to heart and lungs.

What causes an ASD?

The exact cause of ASD remains unclear. However, it is believed that during fetal developmental stages, a hole is present in the interatrial septum, which gradually closes before birth or during infancy. If the hole persists, it is called an atrial septal defect.

Based on the location and development of ASD, it is classified into four types:

Usually after birth, babies who have ASD may not show any associated signs and symptoms. But, symptoms may appear during adulthood around the age of 30 years. Most of them don’t have any symptoms even after many years.

Some of the common symptoms associated with ASD are:

Genetics and environmental factors usually play a role in congenital heart defects. Some conditions during pregnancy may confer high risk for heart defects,

Complications of an untreated ASD:

Most ASDs are diagnosed incidentally during regular heath check-ups. If a heart murmur is heard during auscultation, you may be advised to undergo further tests to confirm the diagnosis of ASD:

Treatment of ASD depends on the age at diagnosis and the size, location and severity of the defect. Small ASDs might not need any treatment because it closes on its own. The doctor may recommend surgery if the atrial septal defect is large, even with fewer symptoms to prevent problems later in life. Treatment of ASD includes medications and surgery.

In cardiac catheterization, the doctor closes the hole in the septum with a mesh patch or a plug in the defect place using a catheter. The heart tissue then grows around the mesh slowly, sealing the hole permanently. This procedure is mainly performed to repair only the secundum type of atrial septal defects. Defects not amenable to closure with device may need open-heart surgery.

In open-heart surgery, the defect may be closed with stitches or a special patch. This procedure is done under general anesthesia, mainly for repairing primum, sinus venosus and coronary sinus atrial septal defects.

Atrial septal defects cannot be prevented, but following certain measures during pregnancy might be beneficial to prevent the risk of ASD, such as: